There aren't many of these left for a while so head on over.

www.theatomiccakeco.blogspot.com
Posted by Amy, Jeff and the kimchis at 1:21 PM No comments:

What's In A Name? A lot, apparently.

So, this new baby's name is Lucinda, right? Well, maybe.

I had a dream the other night. No, it wasn't the one where crocodiles come into my backyard and I have to walk on their heads to escape, nor was it the one where I'm on the edge of a giant rocky cliff and I have to keep preventing my dog from jumping to her death. Nor is it the one where I'm trying to catch a flight but can't get to the airport. I'm sure these all have deep meaning that I should investigate with a psychologist but I don't have that kind of time. No, this one went something like this:

I walked into the adoption center in Seoul, but it wasn't really the adoption center but whatever, it was probably a McDonald's or something. Anyway, I saw a baby sitting there but I couldn't make out what she/he looked like but for some reason I knew she was our kid. I told the lady I was there to pick up a baby and she was like "name" and I said :Eun Seo" and she checked her clipboard. She said they didn't have a baby named Eun Seo so I pointed to the one sitting there and said "she's right there." The lady told me that baby's name was Charlotte, not Eun Seo and then I argued this point with her for what seemed like hours. Finally, I went into my big blue adoption bag and found a manila envelope with her paperwork in it and when I pulled it out, I saw that it had the name "Chuck" on it and all of a sudden I was like "OMG, you're right, her name IS Charlotte!" Then I woke up.

Well, now I don't know what to do, so here's what I'm doing. We're not naming her anything until we meet her and see who she looks like. A name is a big gigantic huge deal to me and I don't want to regret it. I named a dog after an obscure band from the 90s and a few years later made a mental note to not name dogs after obscure 90s bands anymore so I take this shit seriously. So, she's back to Eunie for now. FOR NOW. My brain works in mysterious ways and we have a lot of time before we meet her so I can't guarantee anything.
Posted by Amy, Jeff and the kimchis at 6:01 AM 2 comments:

www.theatomiccakeco.blogspot.com
Posted by Amy, Jeff and the kimchis at 6:12 AM No comments:

So, we got a baby update yesterday! Sadly no picture but just imagine a really cute Korean baby when you read this. She's doing GREAT and can hold her head up and looks like she wants to crawl. Crawling doesn't seem to be a big priority in Korea because the moms tend to carry them everywhere so I'll be surprised if she starts. Please don't start with the whole "she won't learn math of she doesn't crawl" bull crap (yes, people really think this) because Max never crawled and he's balancing my checkbook as we speak. Anyway, she's about 14lbs, which is kind of small but they said she's not too keen on eating cereal and isn't gaining much weight on milk alone. They're also working with her on bearing weight on her legs, which is about the only delay they've found but considering she's in a carrier on her foster mom's back all day long, not bearing weight on her legs isn't really that much of a shocker.

She's also cute and cuddly, loves to get kisses and hugs from her foster family, is VERY attached to her foster mom and will cry when she is out of sight. While that may make you cringe, we look at that as a very positive thing because it means she knows how to form attachments with people and we know she'll eventually form one with us. However, that also means that our departure from the adoption center in Korea will be met with blood curdling screams as it was with Max. That part I'm not so excited about. Overall she's doing really well and hopefully she'll be home sooner than later.

Oh yeah, we're naming her Lucinda, or Lulu as she's known around here now. Or if you're Max, you can yell "WOO WOO" when you see her picture on the computer.
Posted by Amy, Jeff and the kimchis at 6:34 AM 2 comments:

I have two words for you: Kittens and booze.


www.theatomiccakeco.blogspot.com
Posted by Amy, Jeff and the kimchis at 6:50 AM No comments:

So, I have some adoption updates. We sent our gigantic packet of paperwork off on Saturday and it's now getting ready to travel to Seoul so they can start to file all of Eunie's Korean paperwork. Our "legals" are being FedExed to us and we should have them tomorrow. Legals are legal paper or something. Something "legal." Honestly, I'm not sure what they are. There are a lot of papers in an adoption. Anyway, those things mean that we can probably say our countdown to travel is about 4 months or so. That is based in nothing scientific. I looked at some time frames on the internet and guessed but I'm pretty confident in that guess. That means that there's a good chance she'll be home before her first birthday. It also means that Jeff and I will have made this trip twice now at nearly the exact same time. We traveled in mid-December last time and my calendar tells me the same for this one. SO WEIRD! Thankfully we'll get to experience the joys of the holiday season in Korea. It's both bizarre, like the creepy animatronic not-quite-Santa in the market, or gorgeous like the perfectly decorated rice cakes I was drooling over the whole time.
Anyway, this also means I have to get my ass in gear and get my house in some kind of shape before she comes or else it'll never happen. I started taping the foyer for stripes and should have that finished by Sunday. I'll post pics. I'm going to be a painting machine for the next couple months. I'm also shutting down the cakes for a while. It was getting too big. Maybe someday. Anyway, I don't have time because I'm too busy buying crap like this: 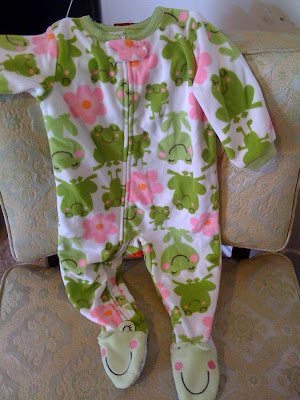 What the hell? I couldn't resist the little frog feet. I can't handle all these cute little girl clothes! We also picked up some gear. This is a sit and stand stroller. This this is bigger than my car and I'm not exactly sure how you even work it. Max is obsessed with it as you can see. Eunie will ride in the front. I think I need a class C license now. 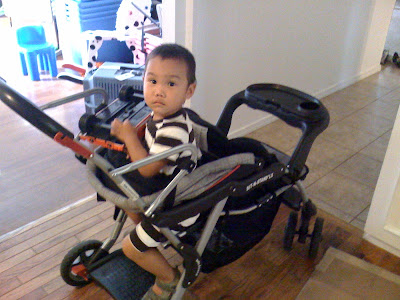