So, this weekend was my first fancy schmancy wedding cake. It was very stressful because I did a lot of stuff I had never done before, including making flowers out of gum paste but I promised her the moon and the stars so I had to suck it up and LEARN. I spent most of the week making the flowers and I have to say that I think they turned out pretty well. I was afraid I'd have to punt and buy them fresh but I went with it and I was really happy. The topper was a tiger pulling a donkey. Don't ask me why because I don't know and I don't judge. Here's a photo tour of the cake: 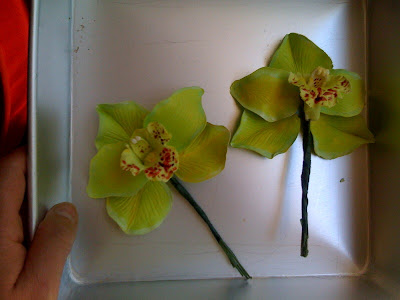 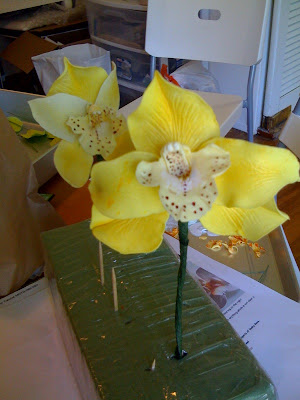 The cake was HUGE so I assembled it on site. I set up 80% of the decoration before transport. Here's the start of the bottom two tiers. 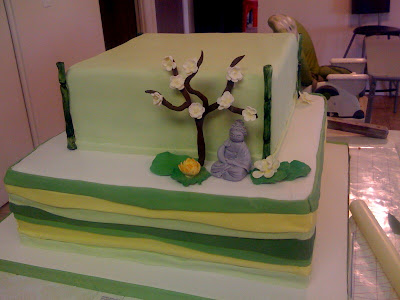 And the top two 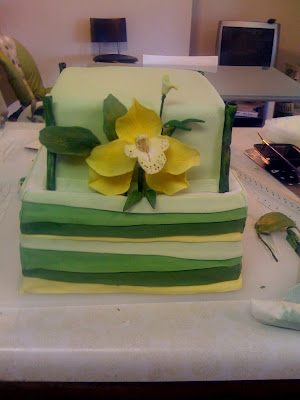 Since the tiger and donkey represented the bride and groom for this affair, I made him a donkey groom's cake. This was apparently a bigger hit than the actual wedding cake. Go figure. 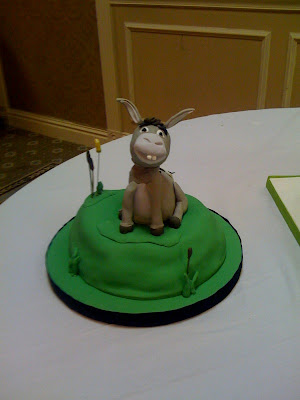 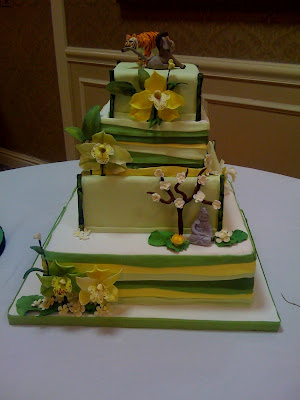 With the bride's bouquet 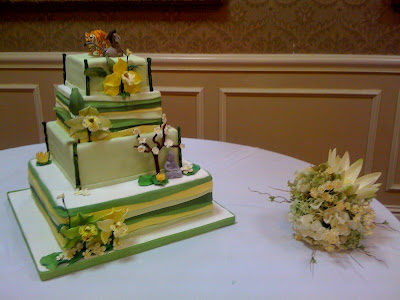 I'd like to give a special shout-out to Dick Van Buren and Sharon Meyer, that's M-E-Y-E-R, for all their help this weekend. We make a great team!
Posted by Amy, Jeff and the kimchis at 6:20 PM 1 comment:

So, it's been kinda busy and weird and loud around these parts. This child is going through what can only be described as the worst case of the terrible twos that planet Earth has ever seen, so I haven't had much time or brain power to do anything other than plead with him to STOP WHINING, STOP THROWING, STOP YELLING, STOP KICKING, ETC. Seriously. This whining sound is horrific and it starts the second he wakes up (at freaking dawn no less) when he yells CUP CUP CUP and continues until he goes to bed when he yells CAR CAR CAR. All the live long day. It's slowly turning my brain into pea soup, which I hate. Who thinks pea soup looks delicious? It's like someone already ate it and it didn't agree with them (as my meemaw used to say.) Anyway, aside from that loveliness, I've been working on a wedding cake for next weekend which required many, many things I had never made before. Here are a few highlights: 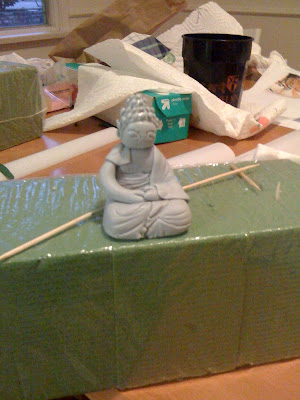 Buddha (or Booba as Max calls him.) 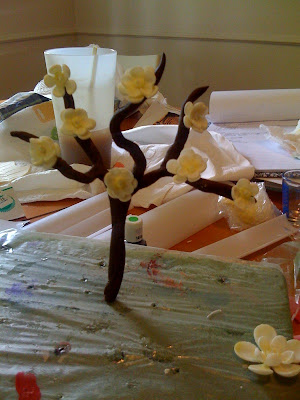 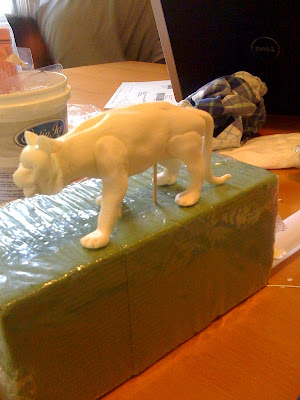 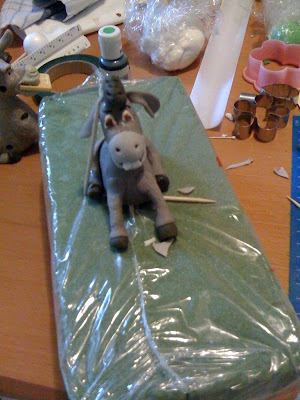 Yes, all these things are going on the same cake (don't judge) and as we all know, I LOVE tiny things so I've had fun making them. These are all about 3" tall at most with the exception of the tree, which is about an inch or so taller. This is my first cake in a while and I'm excited to get back into it. Tonight I have to make all the sugar flowers, mostly orchids, and the greenery so I might post pics of those tomorrow. Unless the whining makes me go completely insane in which case I doubt they'll let me bring my cake supplies into the loony bin.
Posted by Amy, Jeff and the kimchis at 6:18 AM No comments:

So, I hope all you mothers out there had a good day Sunday. I woke up in a really special way by putting my foot in the pile of dog throw up that Zoey left under the covers for me. That dog is so sweet. Such a giver. I had really wanted to start doing laundry as soon as possible that morning so it all worked out well for me. YIPPEE. After that I got to clean and cook and host lunch. It was a nice day and Jeff made delicious ribs but next year I'm spending mother's day BY MYSELF IN A DARK ROOM VOID OF CHILDREN AND MESSES.

I also went for my surgical consultation yesterday and now we're more confused than ever. The surgeon said that he's looked over all my tests and that I'm smack in the middle of the pack as far as how harmful Flappy is. Flappy is what we've decided to name the hole in my heart since technically it's a flap that didn't seal rather than a hole like I got shot GANGSTA STYLE. We also like to name dumb things, like we named this weird piece of furniture we have here Jamal. Why, I don't know but that's what we call it, like "Did you put the mail on Jamal or in the office?" Anyway, Flappy isn't so bad that I'm going to keel over right now but it's bad enough that it caused the stroke so he's basically leaving it up to me. There are two schools of thought with this condition, those who think surgery is a good idea and those who think it can be managed with aspirin and/or a blood thinner. The problem is that I'm still going to have an increased risk of blood clots but that doesn't necessarily mean I'm going to have another stroke but it could happen. He wants us to talk it over and call them back in a few days to talk again. I guess that since everyone is like "oh this is an easy surgery" I didn't really think about the risks but after we talked and he laid them out, I realized it's more involved than I thought so my mind blanks out when I think about it. Seriously. It just blanks out. I guess we'll decide what to do over the next few days so I'll keep you posted.
Posted by Amy, Jeff and the kimchis at 6:07 AM 8 comments:

We spent almost 13 hours in the car and 7 hours sleeping and we were gone for 33 hours. You do the math.

So, our trip, if you can call it that, was pretty successful. We left late, of course, and by the time we got to the hotel, we only had enough time to run to the room and shower before we had to head downtown for our dinner reservations. Traffic SUCKED because of construction so it took us over an hour to get into the city, which meant our reservations went out the window and we decided to try and find somewhere near the venue to eat. Food is important to us! The traffic also meant that I was the world's worst backseat driver and I spent the whole ride down freaking out over the people darting in and out of traffic. Seriously, fine people of Chicago, what is the deal with your driving? Oh a lane is ending, well you make sure you floor it right until you get to the orange cones and then dart back into traffic, cutting off whoever is there. NO PROBLEM. Oh you don't want to wait in the line with the rest of us? Well then, go ahead and drive on the shoulder so you can be 4 cars ahead. That'll make all the difference and totally doesn't make everything worse, right? RIGHT?! No, it doesn't. It makes other people very mad.

Anyway, we got to the venue and scored on $4 street parking although we still had to find somewhere to eat. We ended up at a place called The Fat Cat and had to most delicious appetizers called Reuben Balls. They were, well, Reuben sandwich filling rolled into balls, covered in pumpernickel breadcrumbs and deep fried. DELICIOSO! After we filled up, we walked down to the concert. This band is my sister's favorite so we all went for her so all I'll say about the show is that SHE had a fantastic time and that's really all that mattered. It's prog rock, which is not something I enjoy but they would have been more tolerable had the place not been 85 degrees and humid. It was awful and poor Jeff kept squirming in his chair because he had sweat running all the way down his crack. By the time it ended and we were trying to get out through the throngs of people, I was about to pass the hell out and contemplated pushing everyone down to get out. We made it out only to realize it had now started to rain so we had to run 4 soaking wet blocks to the car. If I hadn't been so hot I would have been a lot more pissed off but that rain felt SO GOOD so I ignored the fact that my shoes were like sponges.

We were up early the next morning so we could be at Ikea when it opened because I only had 2.5 hours to shop and that's just not enough time for me. It takes me an hour just to gather myself enough to focus. Anyway, even though I had a list, my head still exploded and by the time I got to the bathroom fixtures, I was totally stressed out. I managed to get the countertops, backsplash panels, shelves and some other crap but really nothing fun and I had to practice deep breathing when they gave me my total. I could have bought about $10,000 worth of stuff and I did decide on the cabinets I want when we do our actual renovation so I got that going for me. We were under the gun by the time we got to the check out so we only had time to throw everything in the car, grab a very quick bite to eat and hit the road. We were home by 6:30. It was like 33 hours of driving and/or rushing around. I told Jeff that now I need a REAL vacation with sand and fruity drinks so we're in negotiations on that. I'm suggesting a place that rhymes with Bawaii and he's more "let's drive to Florida!" We'll see who wins.*

*probably not me
Posted by Amy, Jeff and the kimchis at 5:17 AM 4 comments: